Discover Ostrów Tumski with us

Virtual tours of the Reserve

A book for children ”Historia Poznana” - an extraordinary adventure in the 10th century! 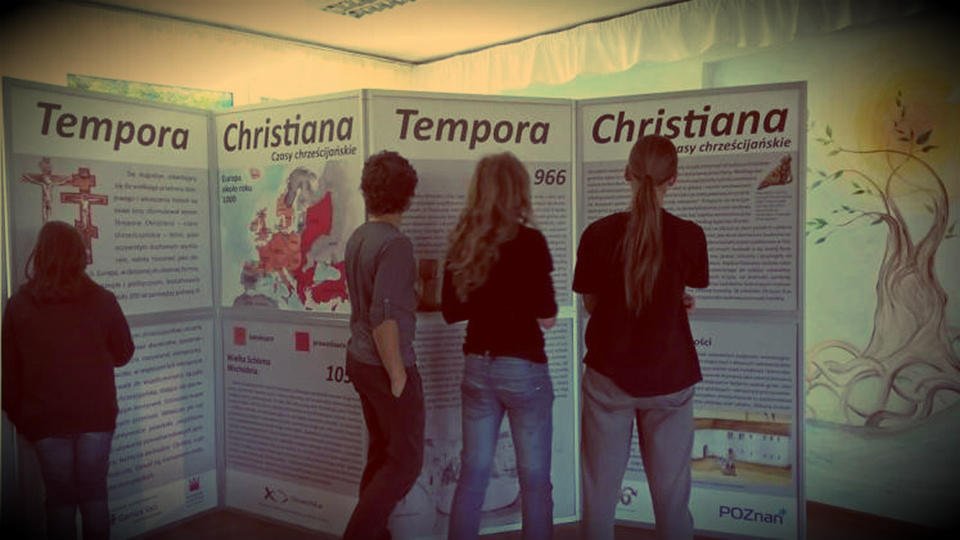 POSSIBILITY OF FREE LENDING EXHIBITIONS
We would like to kindly inform you that there is a possibility of free rental of exhibitions prepared by the employees of the Reserve. We invite you to contact us by e-mail: rezerwat@muzarp.poznan.pl or by telephone: 61 852 21 67.

WHEN POZNAŃ WAS A BURNING ... ARMING

During the reign of the first Piasts, the development of Poland was possible thanks to the well-organized armed forces. The warriors, making foot and horse teams, were stationed in fortified centers - castles. Weapons were produced in servitude settlements, imported, and gained during the fight. That is why militaria, military formations and tactics used by early Piast troops are a good way of telling the story of Poznań and the birth of the Polish state.

Description: Grodziska is a mysterious and often forgotten remains of fortifications from centuries ago. Hidden in forests or among fields, however, they have their own story to tell. Many castles were erected long before the reign of Mieszko I. Others were closely related to the creation of the Piast dynasty, when powerful fortresses built of wood and land were princely power centers. Still others were burned during the power struggles and the memory of them was lost ... The "Castlelands" exhibition outlines the history of the creation and functioning of castles in the area of the Piast state.

The exhibition "Faces of the sacred" brings the elusive realm that has been on Ostrów Tumski for over 1000 years. A secluded island is one of the few places in Poznań, where everyday spirituality prevails over everyday life. Temples have been guarded by temples for centuries - in some there are still prayers, and we will never go to some. During archaeological excavations, archaeologists discover fragile traces of the sacred zone, which are a testimony to the life of the former inhabitants of Ostrów Tumski.

5 tables, dimensions 100 × 70 cm in fittings. Exposition in the room. Folder in pdf for printing.

FAMILY AND CHILD IN MUNICIPALITY

In the past, as today, people's lives were centered around a family bonfire. Medieval families, like modern ones, differed in size, place of residence, way and standard of living. Otherwise, it lived in a city, differently in the countryside, and in a different way at the royal court. In addition, each family member had strictly defined duties, whose fulfillment was to ensure its survival and prosperity. Thinking about this distant past, we face many questions. What were the parents at that time? How did they look after children? What was the child's world like? Answers can be found at the exhibition.

for indoor and outdoor exposure

CHESS IN THE MEDIEVAL - MIDDLE IN CHESS

Poster exhibition about the history and role of chess. The fact that we still have the opportunity to interact with the game invented 15 centuries ago in distant India, is due to the great heyday chess experienced in the Middle Ages (...) This era made chess a royal game, passion for it passed to the next generations, so today we can say in words French historian Michel Pastoreau: The game of chess is not really a game. It is a dream about the order of the world (...) and the destiny of man. A dream based on the model of the Middle Ages, about everything that lies behind the apparent reality of beings and things.

In connection with the 2400th anniversary of Aristotle's birth, the reserve prepared a special exhibition, an album for young people and a program with fragments of Aristotle's texts to be listened to from the archaeological reserve Genius loci and the Archaeological Museum in Poznań. Schools can borrow a poster exhibition free of charge, presenting places related to the life of the great philosopher.

Catalog for the institution renting the exhibition.

The adoption of baptism in 966 was a key event for Poland, but not necessarily so important in the context of the whole world. So what happened in the second half of the tenth century in the center and on the outskirts of the then world? The poster exhibition shows individual zones and continents, their spiritual and cultural heritage in the period in which Poland entered the circle of Latin culture. The world around 966 creates the opportunity to make a journey in time and space, explore new places, learn about masterpieces of art, architecture and technology from around 1050 years ago.